The Appendix Party – or Be Careful What You Wish For

House and Home, Parenting, Well-Being and Self Care | 0 comments 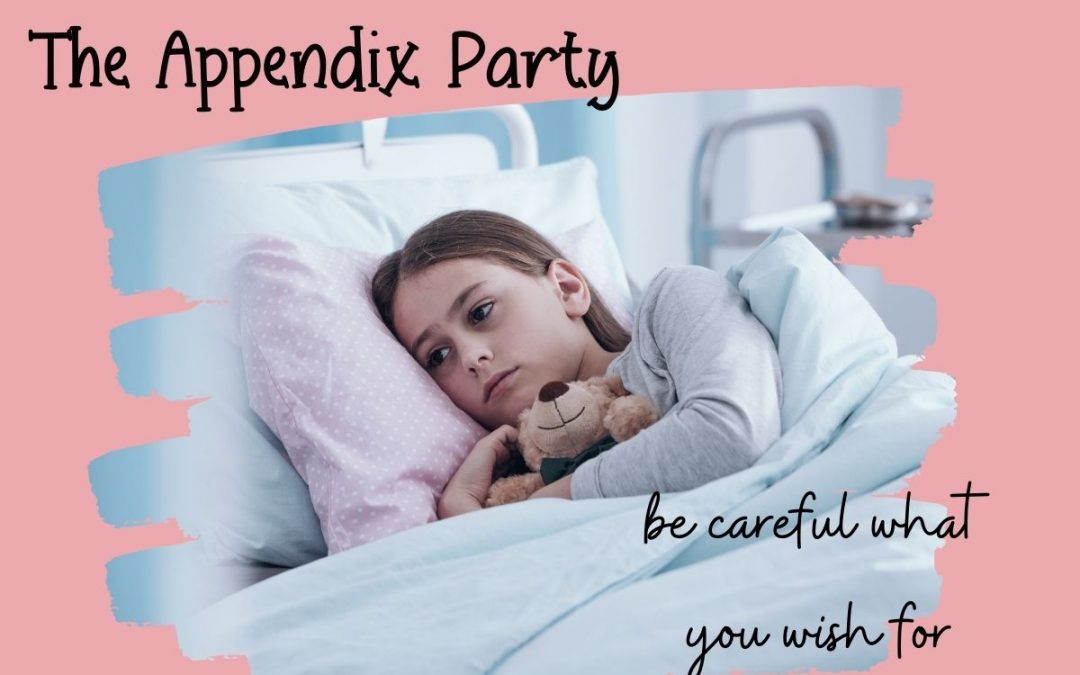 We’ve had an interesting week here. I’m running a convalescent ward for appendix patients. You couldn’t make it up…

One of my daughter’s friends, Melissa, has been off school for a few weeks with unidentifiable tummy pains.  My daughter has been jealous – “She is so lucky to have time off school“.  Melissa got admitted to hospital under observation a few times  – “Oh I’d love to go and spend some time in hospital – much better than school” .

Finally they decided that they would remove Melissa’s appendix last Saturday, and we all trooped in to visit her on Sunday.  “Oh Melissa is so lucky – this room is beautiful and it looks like so much fun in here“.

Be Careful What you Wish For…….

On Sunday night my daughter was complaining of pains in her stomach.  I was totally unsympathetic – looked like a clear case of “me-too-itis” to me.  But I gave her Calpol and sent her to bed early (and she went without question – that was a clue).

On Monday she reckoned it was worse.  She ate breakfast and went to the loo but that didn’t help – she begged me not to send her to school. I really wanted to send her, because it sounded so far-fetched, but something in my instincts held me back.

So instead I booked her an appointment with the most senior, most scary GP in our practice.  Dr. Silver has told me on numerous occasions not to be so silly and that what I had was nothing serious and would get better on its own.  She is usually right, darn it, but I have to admit that I respect her (and am slightly scared of her…). I hoped she would give Anne-Sophie a serious talking to.

Instead she gave Anne-Sophie a quick once over, pronounced that it was almost certainly appendicitis, and suggested we proceed with the utmost haste to A&E and my daughter shouldn’t eat or drink anything else as she would probably be operated on that afternoon. I still didn’t quite believe the coincidence, but the A&E doctor confirmed the diagnosis and she was admitted straight away and operated on the following day.

So a couple of days in hospital for both of us.  Sufficient time for Anne-Sophie to realise that a hospital ward isn’t much fun after all (not when you are waiting interminably with no food) and sufficient time for me to do some business planning and some meditation, far away from the cares of the world (and a decent internet connection).

Now I have heard all about chicken pox parties (and even admit to taking my children to one), but this is the first I have heard of an ‘Appendix Party‘.  Now my son is completely scared that he will be the next person to ‘catch it’.

You may call it the Law of Attraction, you my call it the power of auto-suggestion, or maybe it is just a spooky coincidence.  Whatever it is, we are down two appendices (is that the right term?)  in three days, and I am running a convalescent home in my living room, looking after Anne-Sophie and Melissa, while her mum goes off to work.

It’s enough to make any mum reach for the emergency chocolate….