I was sent a few cartons of the new Vita Coco Kids range to try out. 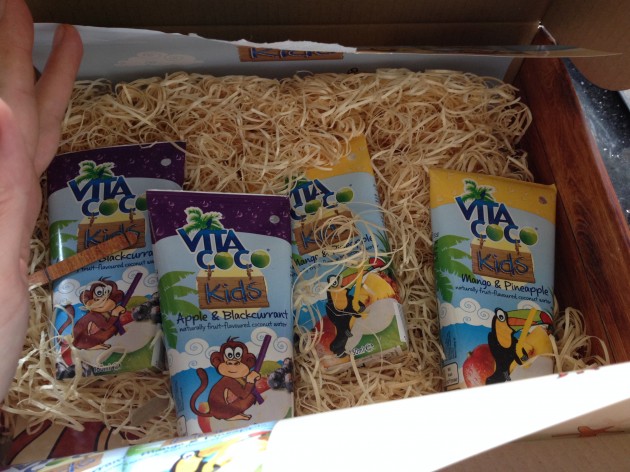 In case you havent’t heard of it Vita Coco is a drink made from coconut water and natural fruit flavours. It comes in two flavours, Apple & Blackcurrant and Mango & Pineapple.

The manufacturers are very proud of the fact that Vita Coco contains less sugar than many other children’s soft drinks.  There is no artificial sweetener at all.

I did a little bit of research into coconut water – it certainly seems to be causing a stir – it is full of nutrition, and very good for hydration

Even the few articles that were negative about coconut water merely said that the super effects may be slightly exaggerated but at least it won’t do any harm.  So from my point of view if my children will drink this in place of sugary drinks then they are getting some nutrition rather than none, and that has to be good.

The branding is fun and funky – I like it and I think my children would too.  Apparently you can get these cartons at Waitrose, Sainsburys, Tesco, Holland & Barrett, Whole Foods, Planet Organic, speciality and health stores and other independents.

So here is the big if – the taste test – what did my son  really think of Vita Coco?

Not the highest praise I ever heard, but enough for me to know I could sneak it into his lunchbox instead of a juice drink and he wouldn’t turn his nose up at it.

I tried one myself and it was fine. I don’t like coconut and was worried that it would taste funny, but you wouldn’t know it wasn’t just an ordinary soft drink.

So there you have it – we say go and try Vita Coco today!