Simple Ways Cycling to Work Can Save the Planet

Obviously, cycling to work has many benefits: it saves you money on petrol, takes a lot of the stress out of commuting, and can improve your overall physical health (not to mention, you have an excuse to buy some pretty cool-looking cycling outfits). But, getting on your bike on a regular basis also has amazing benefits for the environment. Here are some simple ways this simple choice can help you to save the planet:

Emissions from fossil-fuel-powered cars are the single biggest source of air pollution in many countries, accounting for over 30% of the carbon monoxide and nitrogen oxides in the atmosphere and contributing to global warming, according to the Union of Concerned Scientists.

Although more environmentally-friendly cars are being produced in recent years, bikes are tens of thousands of dollars cheaper and produce zero emissions. Biking to work on a regular basis can reduce your overall household emissions by 6% or more.

Consider all of the natural resources needed to make and maintain a single car—iron, magnesium, aluminium, silica, natural gas, coal, and rubber, and often animal parts—all of which require money and energy to harvest. Rubber plantations alone lead to the deforestation of thousands of acres of trees every year in South America and South East Asia.

We are also very quickly depleting our planet’s supply of crude oil with petrol-powered cars, which forces governments to consider new ways of harvesting oil that use energy much faster and threaten wildlife. In comparison, a bike requires relatively few resources to make and maintain (and, of course, requires nothing but muscle power). When you commute on a bike, you’re conserving natural resources. The more people that do so the greater the benefit to the planet.

Worldwide, millions of wild animals are injured and killed by cars. Many animals have had their habitats disrupted by the expansion of new highways and roads. Noise and air pollution from cars can cause these animals to flee to different areas, or, worse, get sick, become confused, and display abnormal behaviour.

Endangered species, such as the desert tortoise (not in the UK of course), are especially at risk. The risk of injuring or killing an animal with a bicycle, in contrast, is virtually zero, and bikes don’t produce any noise or air pollution that upsets animals’ natural habitat. If just a small percentage of people starting biking to work instead of driving, there would be a significant drop in the number of animal injuries, illnesses, and deaths.

Car parks occupy well over 8,000 square kilometres of space in America alone, and that number is growing as more and more natural land is cleared for urban sprawl. Chris Summers of the BBC wrote an interesting piece about the extent of the car park problem.

About 20 bikes can fit into a single parking spot. Bikes also take up less space on the roadways and require less space for storage. Even a shop that sells and repairs bikes needs significantly less space than required for a car dealership, a petrol station, or an auto mechanic shop. So, when you choose to cycle to work, you’re becoming part of a trend that will eventually reduce urban sprawl and conserve the habitats and countryside around our urban areas. 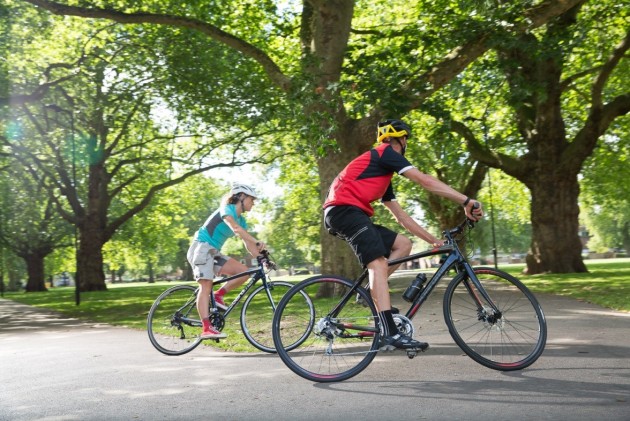 Even if you can’t do it every day, doing it just one day a week has a significant impact on the environment: you’re still eliminating up to five pounds of carbon dioxide emissions in just one day of biking to and from work. Do what you can.

I know, right. Honestly I do not get those places that do not encourage cycling! I mean sometimes I travel and wonder why the hell there are no bike lanes or bike racks in sight! I mean they don’t have to compel anyone to bike, but the encouragement could truly help, right?

Hi Nice article. But me, as a cyclist see this side that cyclist are healthier. They don´t take day offs from work. And therefore US spends less money for treatment, because they are healthy. It is also proven that people who make at least 1 or 2 times per week sport, are healthier that those, who don´t. Me as a cyclist don´t remember when I was sick actually. And that´s the main reason why cycling to work can change the planet 🙂

Yes, I think this is worthy to read!

Brilliant post and obviously really encouraging for all of us here – I’m not the best on a mountain bike so still building up my courage, but hopefully in the near future I’ll have it down 🙂

Really well put, I had no clue I was saving 5 pounds of carbon dioxide emissions every day.

I’d love to cycle to work but the distance is unfortunately too far. The number of people who commute to work in UK is greater than ever before, which is encouraging for the long term impact on the planet.

First of great article. Secondly , I do think the same that Cycling really helps to clean our surroundings with harmful toxins, which fuel spreads. We need to support cycling to create a fresh environment for our future generations.

yep, we need a green living

The truth is that using bikes to work really does help the environment a lot, not only that but it’s extremely healthy for you!

thank you for your article on cycling . I am 100% agree with you . cycling can reduce smoke that we got from other vehicle . this article will help beginner road biker to know importance of biking . thank you . keep it up .

Splendid post and extremely encouraging for us all here – I’m not the best on a mountain bike so as yet building up my boldness, yet ideally, soon I’ll have it down. Thanks for your valuable sharing!!