Latest, Reviews and Giveaways, Well-Being and Self Care | 0 comments 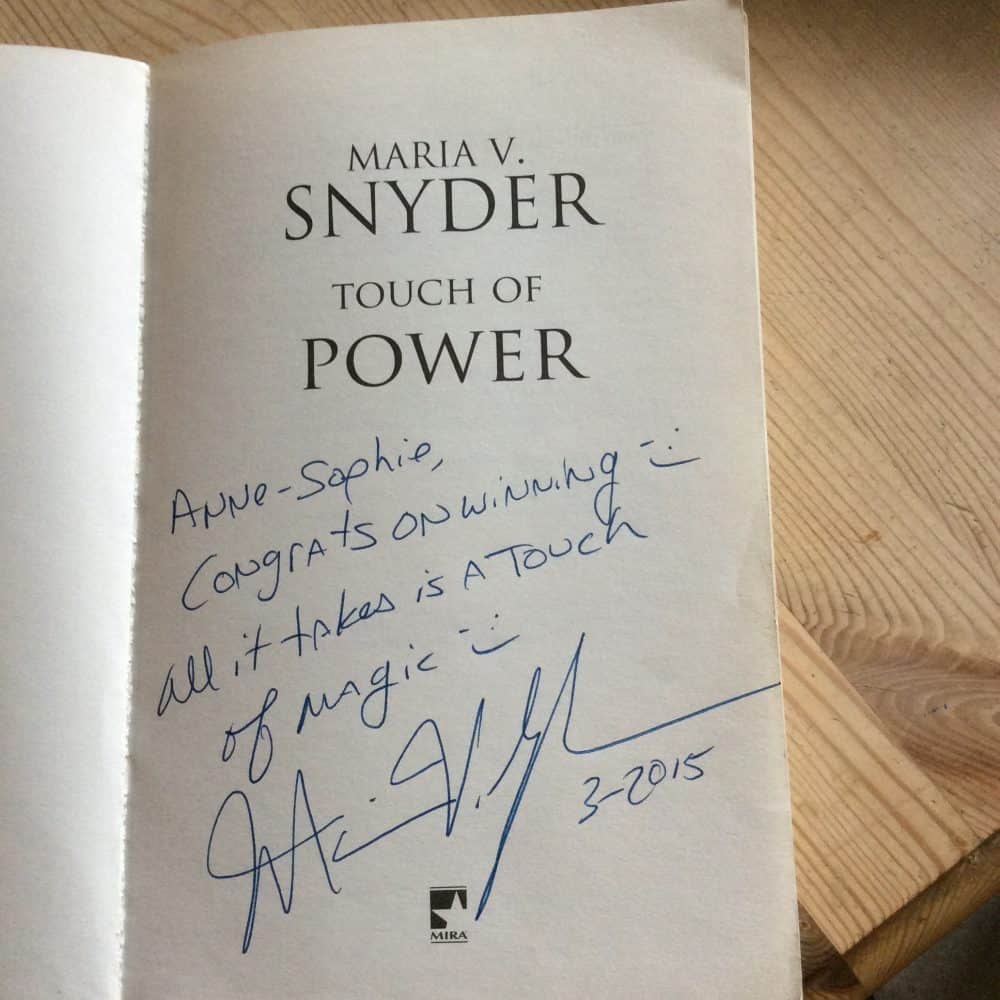 About three years ago my daughter entered a competition in a teen mag to do a video review of a book called Touch of Power by Maria V Snyder, a Canadian author.

We had never heard of her, but we had a go, bought the book and this is what my daughter came up with

The competition was aimed at 10-15 year olds but Anne-Sophie was only 9.  There were two prizes in the competition, but apparently Maria V Snyder herself was so touched with Anne-Sophie’s entry that she asked for a third prize to be awarded and Anne-Sophie received a pile of books.

Anne-Sophie was very happy; she absolutely loved the book and since then has read the  remaining 11 books that Maria V Snyder has written and has become a very big fan indeed.

So when we heard that Maria V Snyder was coming to London to sign her new book in Forbidden Planet we knew we just had to be there.

It was only a one hour signing on a weeknight, but there were probably about 40 fans there. Maria read a chapter from her new book and answered some questions, then we all lined up for the signing.

The queue took absolutely ages – we were near the back.  The allotted hour went past and the shop closed but she was determined to see and talk to everyone.  When you looked at what was happening, she was making real genuine polite conversation with everybody.  Some people had brought all 13 of her books to be signed and she happily signed them all.  So although it was a long wait we happily loooked forward to our turn.

We weren’t disappointed.  The staff had asked us to write our names on Post-its on the books so that Maria would not misspell any names.  When we came up with ours, Maria Snyder thought that she recognised Anne-Sophie’s name. We told her about the competition and she remembered it and congratulated Anne-Sophie.  She signed her new book Shadow Study and also signed Anne-Sophie’s copy of Touch of Power with a very personal message.

So I have one very pleased and happy girl. She has met and been recognised by one of her heroes.  And I am very pleased to have met Maria V Snyder, a very genuine person who truly understands the power that she has over young minds and how to use it to delight them.

PS –  The new book is great too.  One quick note though – I would not recommend these books for every 9-year old girl.  They are definitely teen fiction, with allusions to sex, rape and torture.  But for teenage girls they are really good.