I spent a lovely day on the South Bank this half term, with my 11 year old son and our Merlin Annual Passes. We finished up at the London Dungeon….

We have had Merlin Annual Passes for maybe four or five years on and off while the children grew up.  At first it was to go to Legoland a lot, then Chessington and Thorpe Park. But I have always hesitated at the London Dungeon, mainly because I am of a squeamish disposition myself, and if I got scared, who would reassure the children?

I’m pleased that the London Dungeon themselves recommend an age of 12+ for the attraction.  Now that we have been , I can say that there are younger children who would be perfectly fine with what was on show, but I’m glad we didn’t go any sooner than we did. 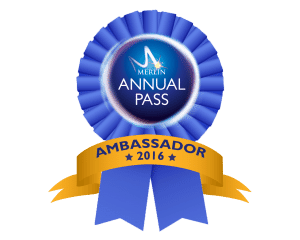 If you have read any of my other blog posts this half term, you will know that we are using our roles as Merlin Annual Pass blog ambassadors to see just how much fun we can have in one week with our passes.  So one day I was in London with my soon-to-be-12 son – we had just been to Shrek’s Adventure and the London Eye.  I offered him the choice of Sea Life or the London Dungeon and he chose the Dungeon. So we braved it together. 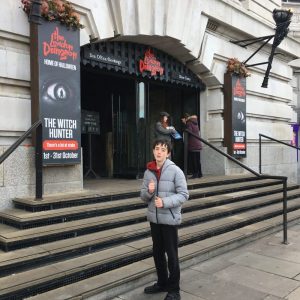 Of course this time of year is a great time to be going to the dungeons – if they weren’t dark and grisly enough they have been kitted out and decorated for Halloween, which I thought was very well done.  The London Dungeon calls itself the home of Halloween and I would agree that it is a great place to go for a scare.

The London Dungeon follows a very similar format to Shrek’s Adventure, which I found a bit funny as we did both in one day.  Once you buy your ticket, you join a group of people who are led on a room to room tour. In each room there are live actors telling a bit of a story.  Sometimes you stand up, sometimes you get to sit down, sometimes you join in with the story. There are other characters in costume apart from the actors that are telling the story – they can pop up out of the shadows and scare you.

The story is not a single narrative.  The various rooms change throughout the year, so check the official website to see what is going on when you plan to visit. On our tour at one point we were the plotters of the gunpowder plot, who had been tried and condemned to death – later on we were trapped in a burning building as the Fire of London raged outside, and in another room we watched the witchfinder general trying to torture a confession out of a witch. It was very exciting and a little bit scary.

A lot of the rooms have special effects – quite a few times you are plunged into total darkness, there are sudden loud noises and jump scares, in some rooms the floors can move and shake, and there are some other shocks that I won’t spoil for you here.  My favourite room was Jack the Ripper, but I will say no more because I don’t want to spoil it.

I think in most of the rooms I was more scared than my son. I held his hand when it went dark – not sure honestly if that was for him or for me.  He was really enjoying himself.

There are also two ‘rides’ – the first is a water ride, supposedly down the Thames to Traitors gate – although even this ride managed a few surprises compared with water rides I have been on elsewhere. The other ride comes at the end – it is billed as a sharp drop ride, simulating the fact that in the story you are going to be hanged for your various misdeeds throughout history.  This ride is advertised very clearly, and my son opted not to go on it, which was very easy to do with no problems.  The people who did go on it screamed very loudly – if this is your thing it sounded very exciting.

I didn’t actually take any photos inside the London Dungeon.  During the live show you are told not to use your phones or cameras and not to touch any of the actors.  I was expecting photo opportunities at the end like at Shrek’s Adventure, but if they were there we missed them. So here instead is an official video clip

We really enjoyed our trip to the London Dungeon – honestly far more than I thought I would.  This attaction is great for older children – any children who are no longer scared of the dark, sudden shakes  or loud noises.  If you are wondering how to entertain your bored teenagers this is ideal, and particularly good at this time of year.

Half term with a Merlin Annual Pass: London Eye

The Merlin Annual Pass January Sale is now on