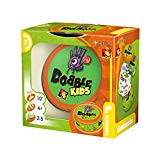 Dobble is a cute little game in a tin, which is very easy to carry around and has very simple rules.

Dobble is also the game which has shown me, beyond any shadow of a doubt, that the lightning-fast reflexes and powers of observation, which I always had as a child and have always prided myself on, have faded substantially and been eclipsed by both of my teenage children. Honestly, playing this game with them, mere adults don’t stand a chance…

We first came across Dobble on a visit to Coffee and Dice, one of our favourite gaming cafes in Bournemouth, and a great way to pass a rainy day on one of our holidays in Mudeford. You pay to use a table and you can play as many games as you like from a vast selection, so we chose a game each in turn and one of them was Dobble.

The premise is very simple – there are 55 cards, each one has 8 symbols on it out of a total of 50 symbols. if you take any two cards at random, they will always have exactly one symbol in common, so the games that you can play with the Dobble pack consist of identifying the common symbol between two cards and being the fastest person to do so.

if you are interested in the mathematics behind why it’s 55 cards, 8 symbols and how you can guarantee that there is only one common symbol on each pair, then there is a leaflet in the tin which tries to explain it But for most of us, the best thing is to just get on and play.

How to play Dobble

The booklet suggests 5 different mini-games but you can make up your own as well, as long as you all  on the rules before you start.  We found after our first game that it was also useful to look at all of the symbols and decide what we were going to call them because there were one or two in the first game where the children had spotted the symbol but didn’t know what it was.

You can, of course, play with these cards as a solo game, maybe matching card to the one which comes before it and timing yourself to get through the whole pack.

Here are a few puzzles to give you an idea – find the common symbol between each pair of cards:

Are you hooked yet? I could stare at these for ages.

I haven’t included any photos of me playing the competitive games because, as I said my children outclassed me in every way – it was totally embarrassing. I’m proud of them but also sad that I am no longer as observant or fast as I thought I was. I’ll stick to taking photos – I’m better at that!

But there it is – a good game and one that my children enjoy playing together and on their own. Here they are, playing each other – a great garden game for teens who don’t want to run around any more.

You can buy Dobble on Amazon (affiliate link) and I think it would make a fantastic stocking filler or a party gift for a birthday, especially if you have kids that get up at the crack of dawn on Christmas day and need something to entertain themselves before the adults get up.