Mahatma Gandhi – an example of the Power of One 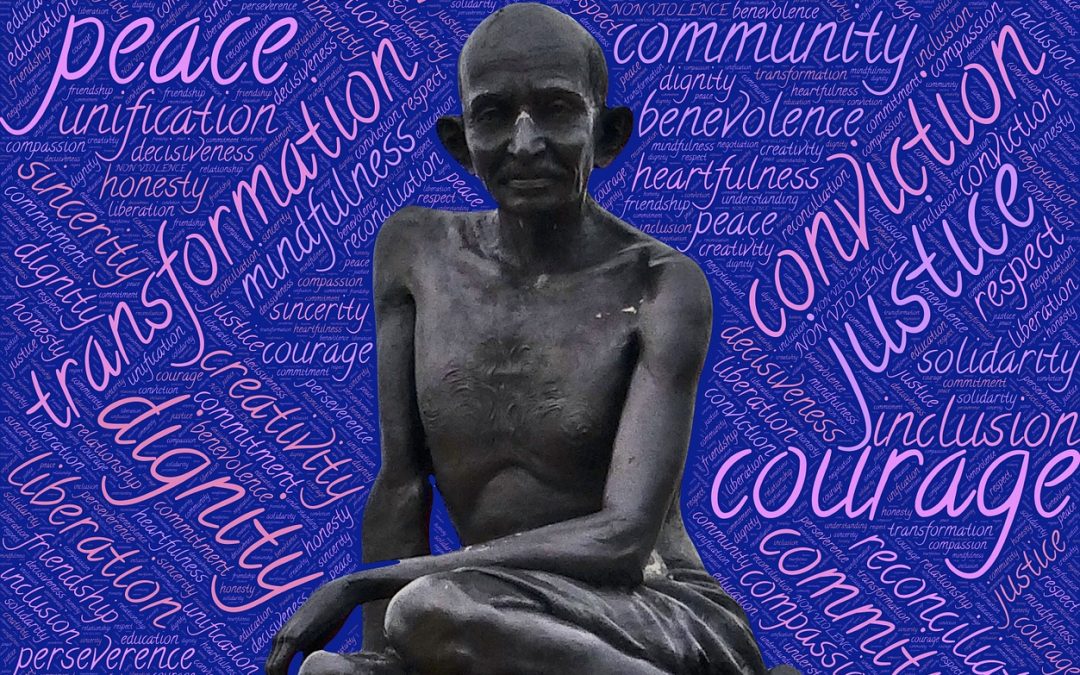 Mohandas Karamchand Gandhi (Mahatma Gandhi) (2 October 1869 – 30 January 1948) was an Indian lawyer, and political ethicist, who employed nonviolent resistance to lead the successful campaign for India’s independence from British Rule. The honorific term Mahātmā (Sanskrit: “great-souled”, “venerable”), was first applied to him in 1914 in South Africa, and is now used throughout the world.

This is part 12 in a 30-day series of articles entitled The Power of One – Making an Intentional Impact.

This course is for bloggers, to help you find your blog theme and voice, or for anyone who wants to journal around the theme of why you are here and what your purpose is on this earth. How are you currently making an impact, and how can you make your light shine brighter?

The first blog is here Why what you do matters

The Power of One

Gandhi is a man known for using methods of nonviolent civil disobedience to influence change. Born in 1869, in a time and place where oppressive rule and colonial taxes made it nearly impossible for his people to live, he rallied his countrymen and used peaceful protest as a means to make change.

While living in occupied South Africa, he first used nonviolent civil disobedience to successfully petition for civil rights for the Indian community in that region. He later inspired nations with his tactics, and changed the ways others influence change in their own nations.

He was the leader of the Indian Independence Movement, which ultimately lead to the restoration of India’s rulership to its people from occupation by Great Britain. One man with one goal lead a force against a much larger government, and changed the course of governance forever.

Gandhi’s life wasn’t without trials for his efforts – he experienced poverty, imprisonment, and ultimately assassination – but throughout his life he was a sought after man for his wisdom and world-wide influence.

Gandhi didn’t limit his social impact to politics. He also had a passion for other topics related to his faith, like vegetarianism and health. He applied his passions to all his areas of interest in ways that could educate and serve. Whatever he knew, he made sure to teach. He was an author and a speaker, and could command a room despite his soft-spoken manner.

Gandhi, like Mother Teresa and other influencers, was one man with a passion that drove him to seek justice and live a life of leadership and influence. He also shared the things he loved that had little to do with social justice. He just shared information knowing this truth – when the student is ready, the teacher appears.

“Be the change you want to see in the world”

is one of his most famous quotes. This should easily inspire us to simply focus on the areas of interest we naturally have and gives us a guidepost to where to focus our own influence. Do you love vegetarianism? Make an impact there. Do you want to see justice in society? Go for it! No matter your interest, you can be like Gandhi and make an impact.

Mahatma Gandhi quotes to live by

Happiness is when what you think, what you say, and what you do are in harmony.

Service which is rendered without joy helps neither the servant nor the served.

In a gentle way, you can shake the world.

If I have the belief that I can do it, I shall surely acquire the capacity to do it even if I may not have it at the beginning.

You may never know what results come of your actions, but if you do nothing, there will be no results.