How to cook with Irish Moss 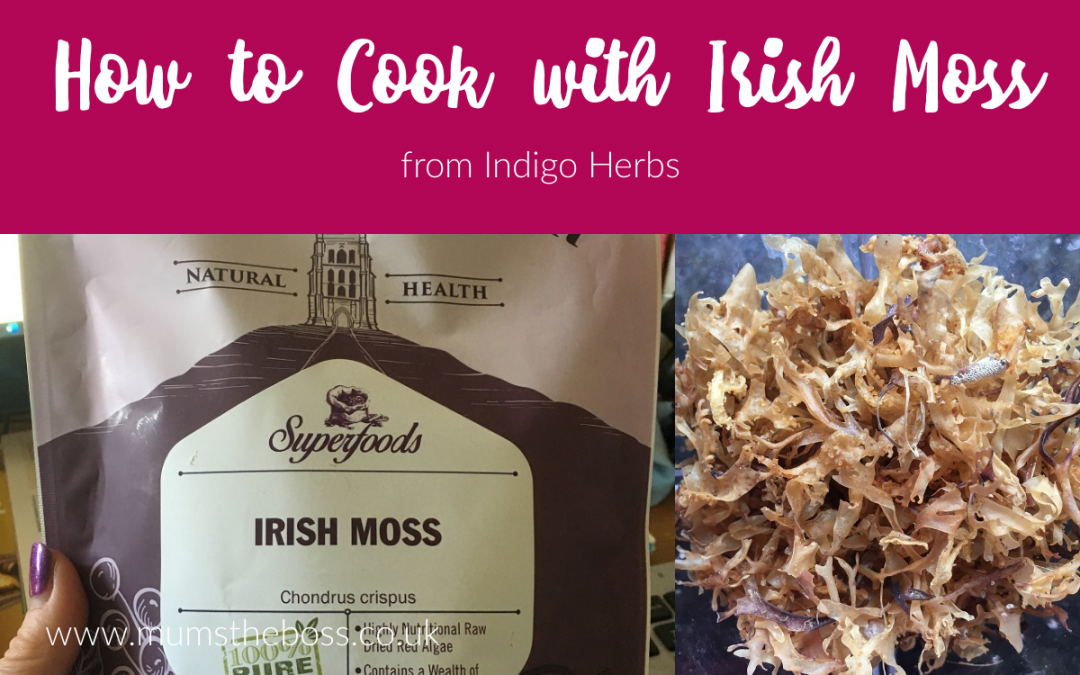 I will be perfectly honest and say that I had never heard of Irish Moss before I was contacted by Indigo Herbs and asked to review some.

But at the end of the day, with a name like O’Connor, I certainly have some Irish heritage, and I’m always up for trying a bit of health food. So I asked them to send it along, and in the meantime, I frantically did some research.

According to Wikipedia, Irish Moss is not technically a moss, but in fact a type of red algae or seaweed, which also goes by the official name Chondrus Crispus, and is also sometimes called carrageen moss.

Moss or not, it is chock full of nutrients. According to the packet I received, a 25g serving provides a huge amount of your Recommended daily intake of all these vitamins and minerals:

That is one very nutrient-dense vegetable!

the other reason why Irish Moss has so many fans is that when you prepare it (by soaking and then boiling) it forms a glutinous gel, which can be used for thickening other products. It is therefore used particularly by vegans to replace gelatine in some recipes.

Well, I’ll start out by saying straight up that I am not vegan and I don’t generally have a problem with gelatine, but nonetheless, I was intrigued by the prospect of trying Irish Moss. The idea of packing that much nutrition and goodness into a smoothie or even a dessert, is certainly appealing. I had a quick look for some recipes online but didn’t find anything that particularly inspired me, so I just made it up as I went along.

The internet yielded all sorts of protocols for cleaning, preparing and cooking the Irish Moss, which sounded a bit complicated. The main problem, it would seem, is getting the salt and the sand out of it.

However, the instructions on the packet I received seemed much more straightforward – a quick soak (20 mins or so) and then a good rinse. I didn’t notice much sand or salt at all, to be honest, so I would say that if you are looking for Irish Moss then the Indigo Herbs product would appear to be a good choice

The next step is to simmer the moss in clean water for 12-15 minutes. It didn’t say how much water, but I put in just enough to cover it and gave it a good simmer. You can see how it was starting to form into a gloopy mass.

Once it was done, I put it into a container and left it in the fridge overnight. When I woke up in the morning, the contents of my jar were a completely solid jelly.

So here is what I did with my prepared Irish Moss:

My first thought having not found anything very inspiring on the net, was to substitute the Irish Moss for spinach in my normal breakfast smoothie.

So yesterday morning I mixed up:

The result was a very satisfying smoothie – a bit thicker and with more body than my normal one, but with no discernible difference in flavour. It was very satisfying and I enjoyed the gloopiness. It kept me fuller for longer, and I was really impressed that I could get so much goodness into me without any kind of weird algae flavour.

Based on that experiment, when it came to making my morning smoothie today, I tried to play to the thickening strengths of the Irish Moss. I’m sorry this isn’t a completely vegan dessert, but I’m sure you could substitute maple syrup and milk of choice for my honey and cows milk.

The result was a very satisfying chocolate custard which made a nice change for me, who normally has a fruity drink in the mornings. It was too thick to drink out of the container but very satisfying to eat with a spoon

The chocolatey flavour was very strong, but the banana and peanuts also gave it a nice twist – and thankfully, once again there was absolutely no suggestion of algae in the flavour mix.

The texture would have been nicer without the flaxseed, but I’m all about my Omega 3s and quality protein right now so I put up with a bit of crunch in my custard…

The only other thing which would have improved this for me would be to chill it before eating, but at breakfast time, I want my food immediately. Maybe I’ll chuck an ice cube in next time…

So buoyed up with those results, I thought I would try to put something together that I could serve to the children as a dessert, and maybe sneak some additional nutrition into them…

My son doesn’t really like chocolate, so I thought I would go with a flavour theme of summer berries.

I made up some more Irish Moss, but this time as soon as I was finished cooking it, I put a big dollop straight into the blender. I then added a big pile for fresh and frozen strawberries, raspberries, blackberries, and blueberries, a dash of cows milk, a couple of teaspoons of vanilla essence and again some runny honey.

I mixed it all up and poured it into individual serving dishes and left to cool in the fridge for several hours.

The texture of this was quite satisfying to look at – the custard was thick enough to leave an indent when you took a spoonful out of it.

In some ways the flavour was nice too – the honey and vanilla certainly brought out the taste of the berries.

But sadly for me and my family – used to pre-packaged desserts with gelatine and who knows what else in them, something was not right with this pudding and nobody really liked it.

The colour is a little bit strange for a start. The mouthfeel texture was a little tiny bit slimy and somehow a bit unpleasant, and there was a strange aftertaste. I can’t say the aftertaste was disgusting, but it was odd, and both I and the children found it a bit off-putting…

I think it would be worth experimenting with this one, especially if you are going plant-based with your family; with a different type of milk, and maybe a few different spices and stronger flavourings this could be a really nice dessert, and the nutritional value is phenomenal for an after-dinner treat.

For me though, I think I’m going to keep all the benefits of Irish Moss to myself and keep taking the super smoothies.

So that’s my overview of Irish Moss. I think I will buy it again for my morning smoothies, which are really delicious, but I will have to try a bit harder to make it appeal to my family.

if you buy and try Irish Moss from Indigo Herbs, and I would definitely recommend this brand, then please leave some comments below as to what you did with it, as I ‘d love to get some more ideas.