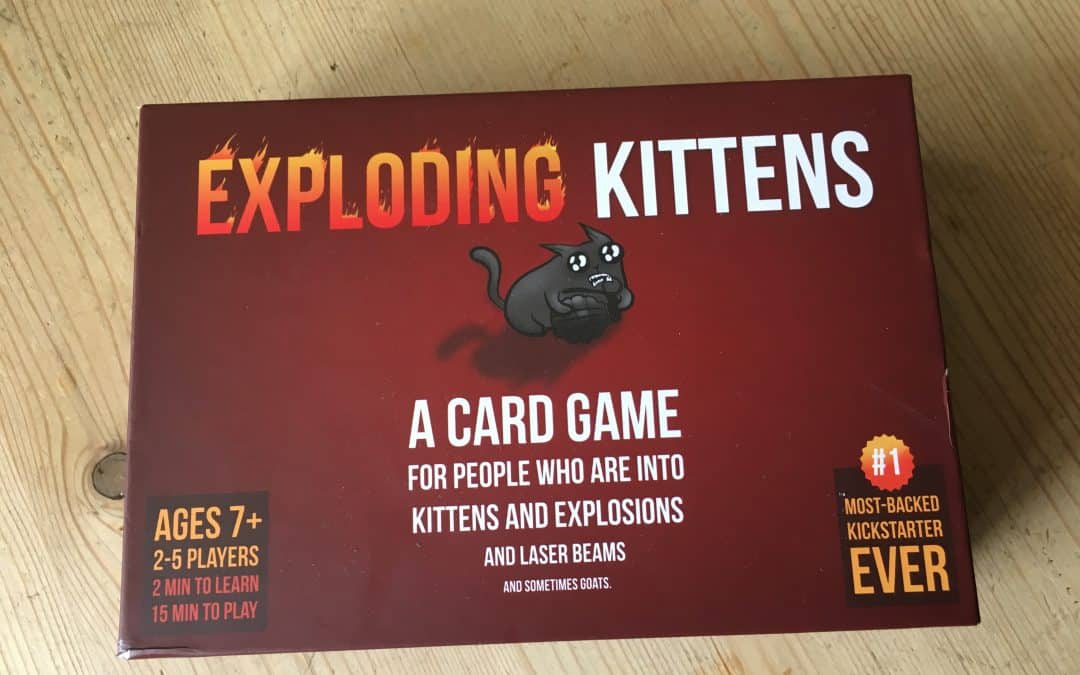 I’m a proud member of the Asmodee UK Blogger Board Game Club and as a result, I get sent one game a month, appropriate to the age of my children to play and review.

In April we have been looking at Exploding Kittens.

Exploding Kittens is a card game with one pack of 56 cards – as a result it comes in a very small light box, and was perfect for us to take on holiday.

We had vaguely heard of the game – it was one of the games on offer when we went to Coffee and Dice last year, and my son was intrigued by it then. We didn’t get round to playing it last year but it was going to be hot on the list to try with this year’s visit – but no,  Asmodee beat us to it!

The game as it comes is suitable for 2-5 players – with 2 decks you can have up to 9 players. The object of the game is not to get blown up by an Exploding Kitten card – you must either defuse it or avoid picking it up in the first place.

The cards are illustrated by the Oatmeal,  and show a type of humour which most children will find very funny

The game is aimed at 7+ although I think there are some children in the younger age bracket who might find the concept of kittens exploding and some of the other humour depicted a bit unpleasant or scary. I’ve shown these cards so you can use your own judgment as to suitability for your own children

At the opposite end of the scale, there are 15 year olds like my daughter, who might look at the cards and think that the game looks too simplistic, and the humour a bit lame and puerile.  But that, as you will see, does not have to be an impediment at all…..

So, we are bloggers, and my children know that, whatever they think of a game, I’m going to make them play it at least once.  So I roped in the scornful 15 year old daughter, enthusiastic 13 year old son, and resigned to his fate dad, and we had a go one Saturday night.

The rules are very simple and straightforward and a game takes maybe 15-20 minutes once you know what you are doing.  It’s a game of suspense – with 4 players, there are 3 ‘kitten bombs’ in the ever-dwindling pack of cards, and the last person remaining after the others have exploded is the winner.

The rules sound very simplistic, but what we noticed is that we all got sucked in very quickly.  in the first game I was eliminated very quickly, and dad soon after. But the two children spun out the suspense to the very last second, staring each other in the eyes and playing each card with a flourish.  I got knocked out of the second game too, and another cut throat struggle ensued between the three of them.

Once we came away from the table that first night we knew this game would form part of our regulars, and will also be taught to visiting friends.  My son got the app straightaway, and has already indoctrinated several schoolfriends. We are likely to buy the expansions too.

Exploding kittens is one of those great games which is so simple and yet completely addictive.  You need an amount of bluff and counter bluff, and my children are just expert at this. It is available on Amazon priced at £19.67 on the day I visited.  Please take care that the box looks like my one if you are buying for children – there is a version of the game with explicit content aimed at adults which has a darker coloured box.